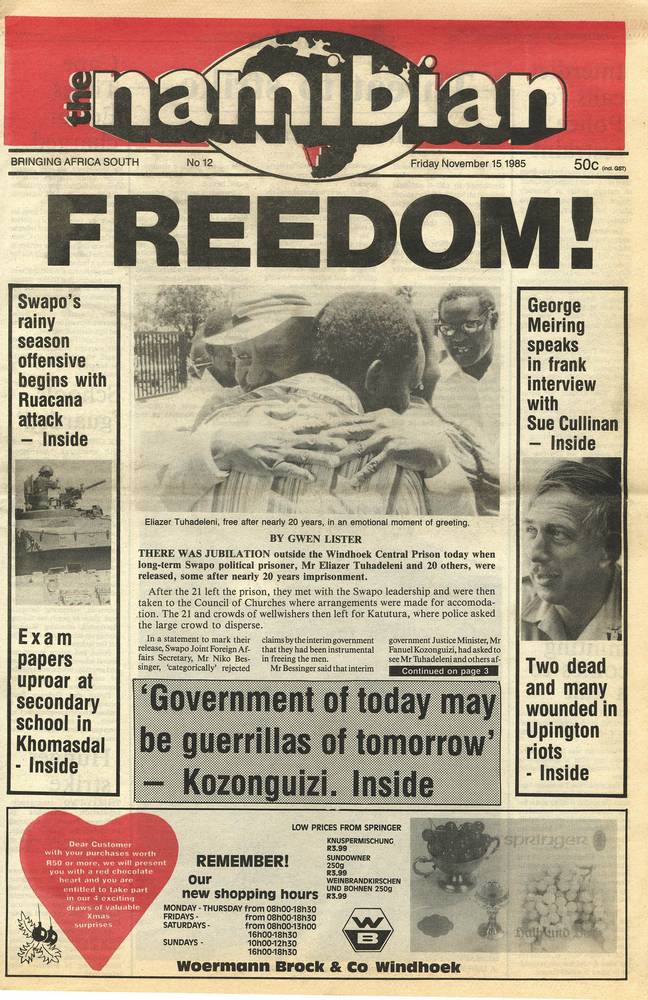 The Namibian newspaper has a long and proud history and commitment to 'telling it like it is'. In its early years (from 1985 to Independence) it was all about the editorial thrust. Advertising was minimal and fortunately funding carried The Namibian through those tough early years when the local business community, mostly sympathetic to the colonial South African regime, turned their backs on a newspaper perceived to be on the side of the 'terrorist' movement, Swapo.

Although the newspaper itself never laid claim to the description, it was quickly dubbed 'the peoples paper', and this is an accolade which is still used to describe The Namibian 30 years later.

This came about largely as a result of the unwavering commitment of staff to expose the cruelties and injustice of apartheid towards the black people of this country, often at great personal cost and sacrifice and in the face of frequent acts of retribution by the then authorities.

The name of the paper, The Namibian, spoke to love of country and people, and it was not long before it became renowned (and hated too in some circles) for its unique brand of campaigning journalism - advocating the independence of 'South West Africa' as it was then known; crucially too, the importance of press freedom and free speech and an early forerunner in the crusade for independent media; revealing atrocities and human rights violations against primarily Swapo-supporting compatriots; and always aligning itself on the side of truth and justice.

Independence finally came in 1990 along with some tough reality checks for the newspaper. Funding dried up, and the big question was how and whether The Namibian could sustain itself. Having won the battle for political survival against all odds, it now faced what was arguably an even bigger challenge: financial viability. Brave reporting alone would not pay the bills. While it was vital that a commitment to editorial independence continue, there was nevertheless an imperative to become profitable to sustain the proud history of speaking out against power. But this could not be done at the expense of principle. It was important to convince the then mainly white-dominated business community that the values for which the newspaper had and continued to stand for, were worthy of their support in terms of advertising.

Sales of the newspaper continued to rise. They had been good from the inception, but keeping the selling price modest in order to ensure access to the downtrodden masses in the struggle years, meant that this didn't bring in that much in terms of revenue. It was realized that newspaper sales alone, even at increased prices, could not sustain the newspaper in its entirety.

In the years after independence advertising slowly but surely picked up, not enough though in the early 90s to offset a number of 'scares' when cash reserves were low and hard decisions had to be taken to ensure survival for another month or more. But by the mid-90s there was a light at the end of the tunnel. Advertising had improved. Efforts were made to focus on building this department and staff cadre to reach out more to the business community, and slowly it began to pay dividends. Not completely though. Doors continued to be shut in the face of The Namibian, as old habits died hard in the white community. But emergent black business helped as did reaching out to agencies across the border. Enough at least to know that the newspaper had survived the worst, and was by then showing positive income growth.

With hindsight, it was the 'ban' placed on the newspaper by founding President Sam Nujoma in 2000, that provided the real turning point. Inasmuch as Namibians had strong allegiance to Swapo, they also had faith and belief in The Namibian. Sales increased and so did advertising. Perhaps it is fair to say that the presidential directive gave impetus to the white-owned businesses to advertise when they had not done so before, as the newspaper which they believed to be a Swapo mouthpiece, had demonstrated its independence to the ruling party in the same way as they had done in the face of apartheid domination in the past.

The die was cast, and The Namibian not only survived the ban on government advertising in and purchase of the newspaper, but also went from strength to strength in the ensuing years.

The next big challenge for the newspaper - a more global one this time - has come with the onset of the digital era and the threat it poses for the future of print as world trends show that more and more people are getting their news online, from social media in particular, and that newspaper revenues have fallen into serious decline.

In the mid to late 90s The Namibian recognized this shift and the need for a multi-platform media environment, and developed its website in response. The big question then, as now, with the added onset of the 'social media revolution', has been how to monetize media presence online and recipes of success the world over are hard to find.

In most parts of Africa more generally, and in Namibia in particular, print continues to buck the downward spiral that characterizes the Western world, but the question that looms large is whether this situation will sustain for the short or even medium term, with the inevitability of decline in time to come and as the continent and its people become more tech media savvy?

There are varying views on the print decline dilemma. Most media analysts feel it is inescapable in the long run, and others (like the author of this report) believe that, with necessary adaptation and skills and commitment to community and quality, the future of print is ours to decide.

It appears that The Namibian is bucking a worldwide trend in which younger people are turning away from print. Important to bear in mind demographics from the Mediametrics survey which shows that the majority of the newspaper's readership is in the age group 25 to 34, majority have Oshiwambo as their home language, and that the majority of readers are in urban areas. It is important that these numbers are kept in mind as far as planning for the future is concerned - looking closely at those age groups which are not reading as much as others, and apart from seeking to satisfy the main reading group/s, also reaching out to others ie rural population, readers both older and younger than the 25 to 34 age group etc.

The integration of the print publication with online (website and social media) will probably be critical in holding the interest of the youth in the future.