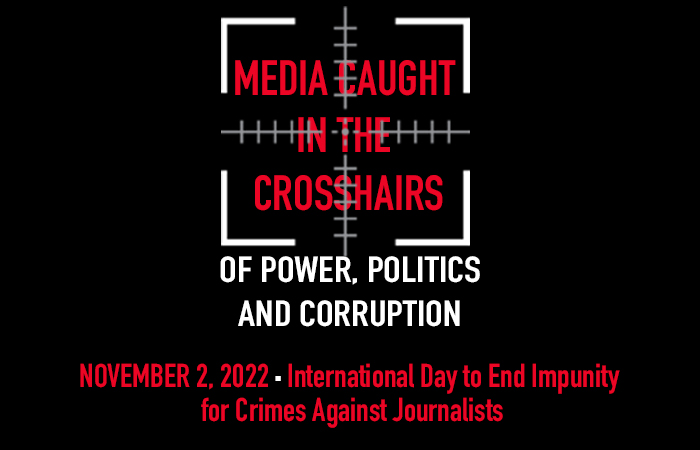 Journalists caught in the crosshairs of Power, Politics and Corruption

Following is the official statement of the Namibia Media Trust (NMT) on the occasion of the 2022 commemoration of the International Day to End Impunity for Crimes Against Journalists:

November 2 was proclaimed by the United Nations (UN) General Assembly in 2013 as the International Day to End Impunity for Crimes Against Journalists (IDEI). In so doing, the UN requested Member States to implement specific measures to counter the culture of impunity.

Despite that, we have witnessed a surge in attacks on journalists and the violation of their rights in African states, including Nigeria, Uganda, the Democratic Republic of Congo, Zimbabwe, South Africa, Ethiopia, Chad, Somaliland, Central African Republic, Togo, eSwatini, Lesotho, Benin, Mozambique, Tanzania, Mali, Angola, Ethiopia, Cameroon, Uganda, Guinea, South Sudan, and Guinea Bissau. A thriving culture of impunity, the result of a lack of political will to prosecute perpetrators of crimes against journalists, continues to embolden evil-doers to turn up the volume of their attacks.

According to Transparency International, corruption is on the rise globally in tandem with the decline in democratic governance. Covid-19 brought this into stark focus, largely through the work of investigative journalists and civic organisations engaged in defending the rights of the poorest and most marginalised in our societies. As powerful elites gain access to more resources, and as the continent is plundered - from inside and out - journalists are increasingly prone to attacks when those with political power sow this devastation with impunity.

As a result, journalists, particularly those engaged in investigative journalism on issues of public procurement and the extractive industries, find themselves in the crosshairs of politics, power and corruption.

Africa is beset with conflicts which create the ideal conditions to perpetuate corruption and impede functional institutions of government. When government funds and resources are diverted through corrupt activities instead of being utilised for the benefit of citizens, social and economic growth regresses.

Countries in the Sahel and other regions are prone to militant threats; online attacks, especially against female journalists, are on the rise; cybercrime legislation which should ideally protect citizens and journalists alike, is in fact weaponised and used to arrest critics, activists and human rights defenders.

Today we specifically remember Chadian journalist Orédjé Narcisse who was shot and killed outside his home on October 20, 2022. He was on his way to work when, reportedly, men in military uniforms opened fire on him. We urge the Chadian government to launch an investigation into his killing and bring those responsible to justice.

Closer to our Namibian border, the government of Eswatini has been waging a brutal and deadly attack on its citizens and the media are particularly under threat. Swaziland News editor Zweli Martin Dlamini and his outlet are classified as terrorist entities by the Swazi government which invoked the country's Suppression of Terrorism Act. We call on the government to rescind the order and allow citizens access to a diverse range of news sources to ultimately make informed decisions.

The level of volatility of the situation in eSwatini can be evidenced by the recent petrol bombings of the homes of journalists on the opposite spectrum of the media landscape. This requires the State to conduct thorough investigations, the absence of which could result in rising violence against media personnel and outlets.

This year, 2022, marks the 10th anniversary of the UN Plan of Action on the Safety of Journalists. The Namibia Media Trust (NMT) has participated in consultations on the review of this Plan which, importantly, notes that there has been a marked increase in digital threats in the last decade that requires decisive action by governments, media houses and media development organisations globally.

Namibia is ranked 18 on the Reporters Without Borders 2022 World Press Freedom rankings and number two in Africa, making it one of the safest countries in Africa for journalists. This should not pave the way for complacency. Our (media) freedoms must be guarded with vigilance for, just as it was granted, they can be withdrawn. Additionally, we would welcome our government speaking out against issues of impunity against journalists elsewhere.

At every opportunity, we reiterate that #JournalismIsNotACrime! In fact, journalists are the frontline workers in our democracies and an attack on a journalist is an attack on democracy itself.

Today we stand firm and demand justice for all journalists who have been persecuted in any form for merely doing their work. To them we say 'continue to speak truth to power. You are on the right side of history. We stand with you!'