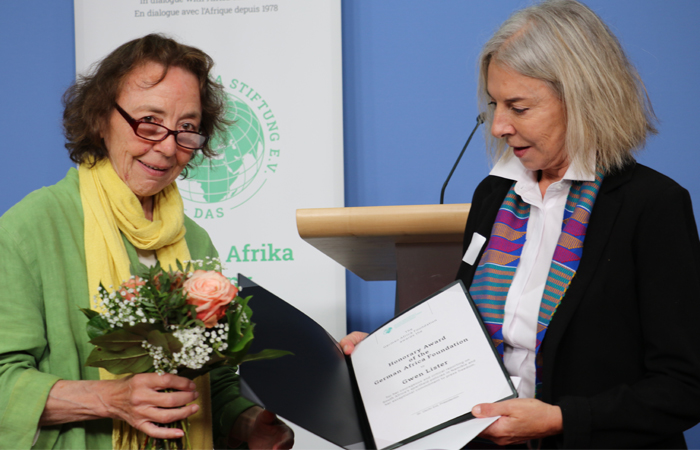 The Deutsche Afrika Stiftung (DAS) presented political correspondent, editor-in-chief and publisher, Gwen Lister, with the foundation's Honorary Award on 1 June, 2022 in Berlin, Germany. Lister has been a significant voice in Namibia's media for decades and a driving force behind the Windhoek Declaration.

The award is intended to recognise her courageous and critical reporting on South Africa's apartheid policies in Namibia, as well as her outstanding commitment to fostering an independent, pluralistic, and free press.

Lister strongly condemned South Africa's occupation of Namibia and its apartheid policies. In 1985, she founded the independent daily newspaper The Namibian, which eventually became the country's best-selling newspaper. Defying state repression, numerous arrests, and attempted assassination by the South African secret service, she carried on with her critical coverage.

In her acceptance speech, Lister praised the DAS for recognising the importance of media in fostering a better society. She went on to say that by accepting her honorary award, she hopes to draw attention to the reality that the battle to save journalism must involve not only citizens throughout the world, but also governments, who must do more than pay lip service to ensure its survival.

"They must defend, promote and protect press freedom even when politicians themselves are on the receiving end of those who should neither be lap dogs nor attack dogs, but true watchdogs over the public interest,’’ she added.

Lister also underlined that journalism and journalists across the world are in danger, possibly now more than ever, and that as a result democracy will be jeopardised unless long-term viability and safety is assured.

She stressed that when press freedom is threatened, other fundamental rights are also in jeopardy, and that the media faces both external and internal challenges, such as regaining public trust by raising ethical, accuracy, and fairness standards. She says democracies will inevitably die in the dark without good journalism, which has changed things for the better and can do so again.

"Ways and means must be found to increase support to media development, and condemn increased risks to the safety of those trying to fulfil this role in non-democratic and democratic societies worldwide’’ remarked Lister.