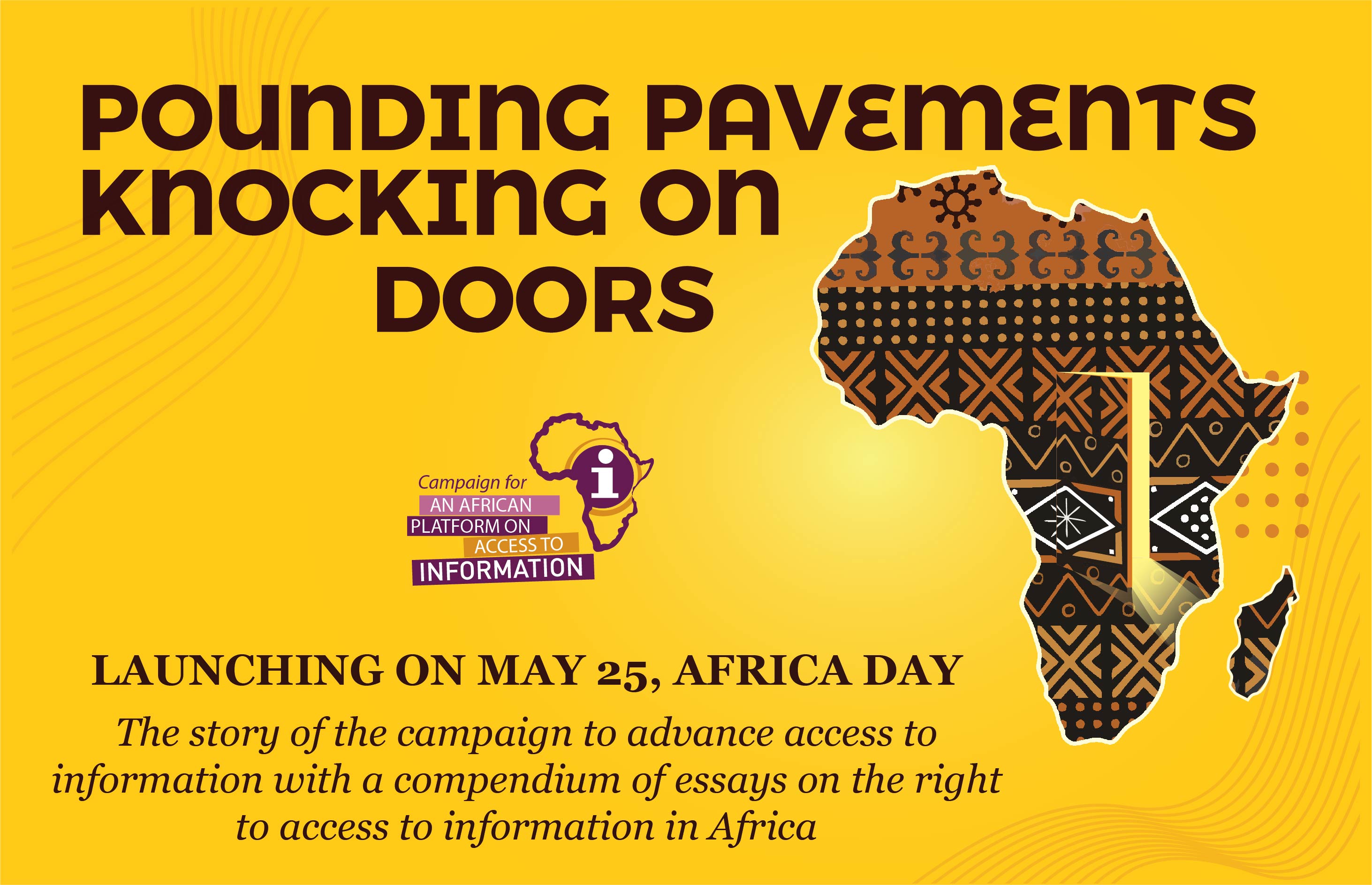 Windhoek, Namibia, Monday, 23, 2022: The Working Group of the African Platform on Access to Information (APAI) today announced the launch of its new publication, “Pounding Pavements, Knocking on Doors” on May 25 – Africa Day.

Pounding Pavements, Knocking on Doors tracks the coalition’s campaign for the proclamation of September 28 of every year as the “International Day for Universal Access to Information” (IDUAI) by the United Nations General Assembly in 2019.

The foreword to the 85-page publication by Liberia’s President Dr. George Manneh Weah, is a compelling account of his motivation in authorizing his Minister of Foreign Affairs, Ambassador Dee-Maxwell Saah Kemayah, Sr, who was then the country’s Ambassador and Permanent Representative to the UN, to collaborate with the APAI Working Group and put Liberia’s name on the General Assembly resolution as the lead sponsor.

“In Liberia, we know that access to information can be the difference between life and death, based on firsthand experience of armed conflict and the role of information in bringing an end to the (Liberian) conflict,” President Weah said.

Produced with support from Friedrich-Ebert-Stiftung (FES), the German non-profit foundation, and Fesmedia Africa, its media project in Africa, the publication tells the story of the campaign to advance access to information in Africa and around the world through the proclamation of a UN Day, following the adoption of the APAI Declaration at a Pan African Conference on Access to Information in Cape Town, South Africa, in September 2011.

It also contains a compendium of essays on the right of access to information written by notable figures from Africa, including the former Chairperson of the African Commission on Human and Peoples’ Rights, Advocate Pansy Tlakula, now the Information Regulator of South Africa; the former Director of the Division on Freedom of Expression and Media Development at UNESCO, Professor Guy Berger, who is currently UNESCO’s Director for Strategies and Policies in the Field of Communication and Information; and former Co-Chair of the international Steering Committee of the Open Government Partnership (OGP). Mr. Mukelani Dimba, among others.

In a preface to the publication, the immediate past Special Rapporteur on Freedom of Expression and Access to Information in Africa, Hon. Jamesina Elsie L. King, reeled out many crucial roles that African civil society organizations (CSOs) have played at national and regional levels in the field of access to information, noting that the African Commission on Human and Peoples’ Rights, of which she was a member, has received tremendous support from African CSOs over the years in developing its various soft law instruments and other activities that have contributed to advancing the right to information in Africa.

But, according to Honourable King, “Perhaps the most significant contribution by African CSOs is their international advocacy activities, in collaboration with some African governments, that led to the UN’s proclamation of the International Day for Universal Access to Information.”

Zoe Titus, chairperson of the APAI Working Group, said: “The International Day for Universal Access to Information has become another gift from Africa to the world. “We chose to launch Pounding Pavements, Knocking on Doors on Africa Day for the particular reason that it is our collective gift to the world and it is important that we celebrate the strong origins of the initiative that led to the proclamation of IDUAI and Africa’s leadership in bringing the initiative to fruition.”

The IDUAI proclamation is coming about 26 years after May 3 was similarly proclaimed World Press Freedom Day in 1993 upon the Windhoek Declaration on Promoting an Independent and Pluralistic African Press, adopted in Windhoek, Namibia, on May 3, 1991 – a significant gift that Africa was proud to bestow on the world.