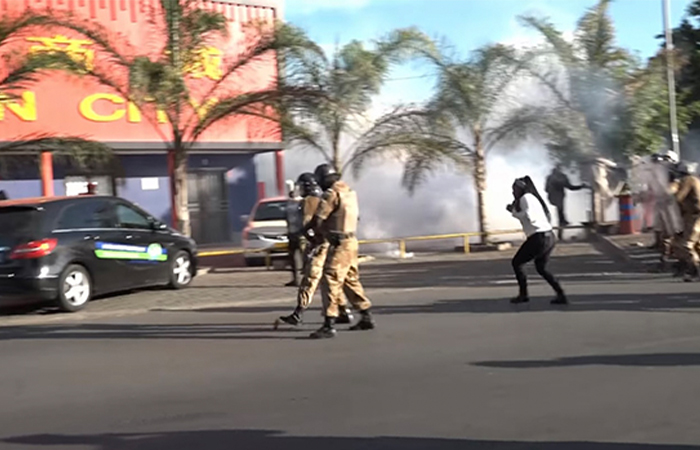 The ACTION Namibia Coalition, a network of civil society organisations campaigning for a legal framework that guarantees the right to access to information, has expressed concern about the use of excessive force by the Police in response to a recent public protest. The NMT serves as secretariat to the network. See full statement:

The ACTION Namibia Coalition expresses its concern about the use of excessive force by the Police in response to the public protest near China Town in Windhoek on Friday May 13.

The Police should exercise maximum restraint when dealing with public protests to safeguard human rights. Random shooting of rubber bullets and tear gas towards crowds should be avoided at all costs.

The ACTION Coalition is also perturbed that several journalists were struck by rubber bullets with some sustaining injuries. Media houses should also make sure their journalists wear apparel that clearly indicates they are media representatives.

The rights to peaceful assembly, press freedom, and freedom of expression are enshrined in the Namibian Constitution (Article 21). In addition, The Police Act states that members of the Police may only use reasonable force in exercising their duties (section 13 (10)).

Previously, the ACTION Coalition condemned the Police’s disproportionate use of force against #ShutItAllDown protesters and journalists on 10 October 2020. We repeat the call we made then for the Police to respect human rights and for the Force to improve its crowd control tactics.

Sensible and proportionate Police responses are crucial if the scenes that took place on Friday and in October 2020 are to be avoided. Irresponsible reactions can lead to further conflagrations and have tragic consequences. In this context, we remember Frieda Ndatipo, who was shot dead during a Police operation at a public protest near the Swapo headquarters in Katutura on August 27, 2014. To this day no one has been held accountable for her death.

Following six years of economic recession and further hardship inflicted by the COVID-19 pandemic, large sections of the Namibian population are suffering, especially the youth who face a 50% unemployment rate. These conditions are likely to spark more protests in the future. While protests should always be peaceful, it is vital that the Namibian authorities, especially the Police, use tactics that mitigate rather than enflame expressions of frustration that are bound to occur in the form of public protest.