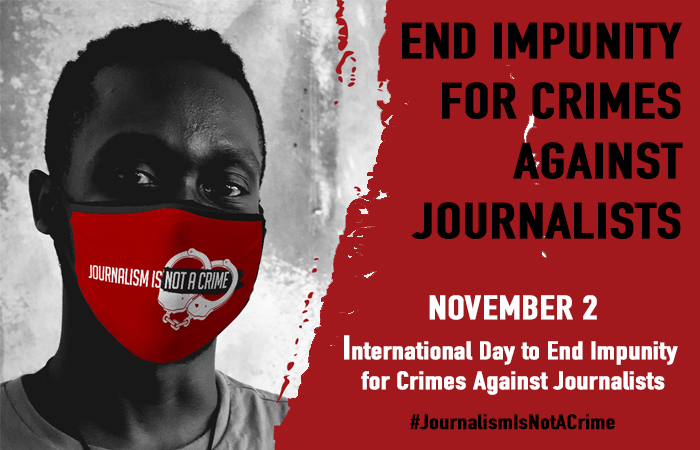 'You are not alone'

Namibian journalists stand in solidarity with colleagues all over the world on November 2, the International Day to End Impunity for Crimes Against Journalists.

Marking the International Day to End Impunity Against Journalists in a country that ranks first in Africa on the Reporters Without Borders annual Press Freedom Index, and 23rd overall globally may seem unusual. In fact, it is not. The Covid-19 pandemic has highlighted our interconnectedness. As Namibian journalists we therefore cannot turn a blind eye when colleagues elsewhere are killed, languish in jails and live in fear of persecution simply for doing their jobs.

This particular day – 2 November – proclaimed by the United Nations General Assembly in 2013 to commemorate the assassination of two French journalists in Mali, is a day for reflection.

It is an opportunity to jointly focus our attention on journalists who are being persecuted, forcibly disappeared or killed - with priority given to the numerous unsolved crimes against journalists.

What we have to reflect on is that the pervasive nature of impunity is not something that emerges suddenly. The culture of impunity intensifies over a lengthy period of time. People in positions of power and authority are fuelled by breaches of conduct that continue unchecked and remain unsolved.

Since March this year there has been an unprecedented rise in attacks, injuries to, and arrests of journalists across the continent. The majority of these incidents are connected to journalists covering the imposition of COVID-19 regulations on citizens by the police and/or the army, journalists reporting on election campaigns or when covering the various protests sparked off in the last few months around the continent – namely Togo, Guinea, Ivory Coast, Mali, Nigeria and South Africa.

It is important for media rights organisations in Africa to demonstrate and garner public support across borders to demand answers from governments on why they are expending energy, time and resources in persecuting the media instead of probing corruption. By failing to look deeply into cases highlighted by the media, public officials will consider it free licence to continue diverting millions of dollars from public coffers, thereby depriving citizens of necessary essential services and rights such as health and education.

On this day it is important to remind the world that Cameroonian journalist Samuel Wazizi’s death cannot go unsolved. We must encourage the Mozambican government to seriously investigate the disappearance of Ibraimo Abu Mbaruco who went missing in April in the Cabo Delgado region. We should be asking for updates on the murders of undercover Ghanian journalist Ahmed Hussein-Suale, Marko Agei Makoor in South Sudan and 70-year-old Nigerian journalist Benjamin Ekom.

We have to express our outrage that for the sixth year in a row Somalia retains the world title as the worst country when it comes to prosecuting murderers of journalists on the CPJ 2020 Global Impunity Index. It is up to us to support Somalian media and demand that authorities investigate cases of killings or attacks on journalists, media outlets and critics.

We should stand with them in support of their demands for justice.

Standing in solidarity on home soil is vital, but why is it necessary to collectively come together on issues far removed from our realities?

For journalists operating in difficult environments, acts of solidarity from colleagues are a lifeline. Standing in solidarity is one of the most powerful counter measures to an excess of power. Collective continental voices remind brazen governments that state-sanctioned misdeeds will not go unnoticed. It becomes an even more powerful tool as it reverberates across borders and continents.

So today, we say to colleagues everywhere … ‘continue to speak truth to power. Be bold in your efforts to uncover wrongdoing. When they come for you, remember, you are not alone. We stand with you!’.