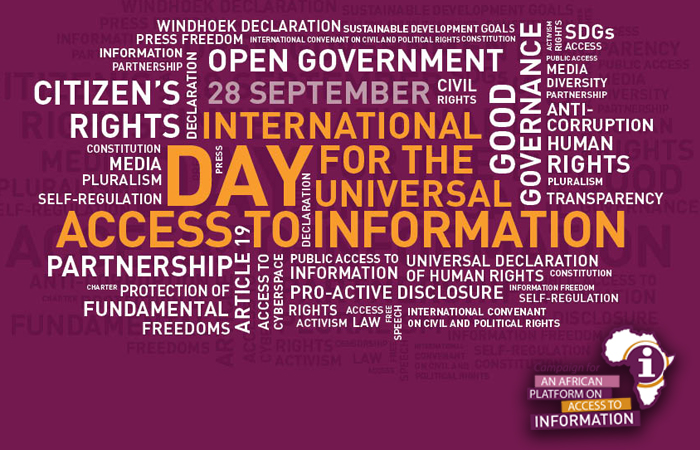 The African Platform on Access to Information Working Group (APAI-WG) today called on African leaders to ensure that no country is left behind in giving effect to the fundamental importance of access to information as the global community celebrates the first International Day for Universal Access to Information as designated by the United Nations General Assembly in October 2019.

In a statement to commemorate the Day, the APAI-WG, a network of civil society organizations in Africa engaged in advancing the right to information, noted that despite the tremendous progress made on the continent and around the world in the last few years more than half of the countries in Africa are yet to adopt laws or other frameworks granting or guaranteeing their citizens a right of access to information.

Zoé Titus, Chairperson of the APAI-WG, said: “One of the profound observations contained in the General Assembly’s resolution proclaiming September 28 as International Day for Universal Access to Information, is the reaffirmation of the fact that freedom of expression and access to information are cornerstones of inclusive knowledge societies. It follows therefore that if Africa is to overcome the challenges of illiteracy and ignorance, it cannot take a back seat in the global drive towards public access to information.”

She praised Liberia for its leadership in sponsoring the resolution adopted by the General Assembly to proclaim September 28 an international Day to right to Africa, saying it was consistent with a similar role played by other African countries in sponsoring an identical resolution which was adopted by UNESCO’s General Conference in November 2015.

According to Titus, the APAI-WG was motivated by its appreciation of the importance of the right to information in deciding to document its campaign for the proclamation of the international Day in a book titled “Pounding Pavements, Knocking on Doors”, saying the group was honoured to have President George Weah of Liberia write the foreword to the book.

Stressing that access to information is now more important than ever in the context of the Coronavirus pandemic, she noted that “At this time, when our future seems so uncertain and we move forward knowing we have to reimagine our new normal, there is no doubt that access to information is our beacon of hope. It is fuelled by our collective vision for a more equitable world free of disease, poverty and inequality. This is our wish for Africa and the world.”

Titus said African civil society organisations and governments should be justifiably proud of the role they played in securing an international day on the right to information, firstly with the UNESCO approval in 2015 and ultimately the UN-level recognition that they birthed in 2019, adding “It is a testament to how collective effort endorsed global consensus on how the right to access to information improves people’s lives.”

She insisted that for the APAI-WG, the achievement, significant as it was, is not the completion of their journey but the beginning of a new chapter as only 23 out of Africa’s 55 countries currently have national access to information instruments.

Titus explained that the network plans to elevate its advocacy work in Africa and globally, with a view to seeing an increase in the number of countries passing legislation that guarantee their citizens this empowering right.

She said the APAI-WG was committed to further strengthening the right to information through a campaign for a legally binding mechanism to support the right in Africa.

According to her, “It would be remiss not to acknowledge the critical importance of access to information which in many instances has meant the difference between life and death, particularly as the world faces a global health crisis. The impact of the coronavirus has brought unprecedented challenges for our societies, both nationally and globally. Public authorities have been faced with significant decisions that affect public health, civil liberties and people’s prosperity. The public’s right to access information about such decisions is vital.”

Titus stated that access to information, and by association transparency, cultivates accountability and engagement, adding that Governments that are intentional about being transparent and sharing information proactively, promote a culture of engagement, inclusive decision-making and ultimately trust.

On behalf of the APAI Working Group