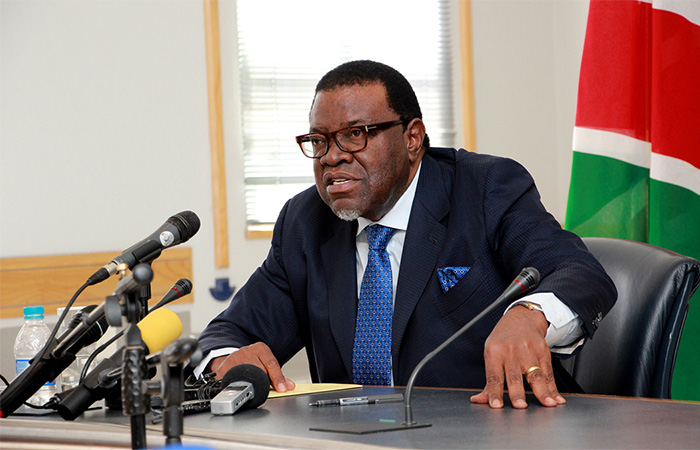 RIGHT OF REPLY: The Presidency responds to concerns about encroachments on media freedom

The Office of the President has responded in detail to a media statement in which the NMT expressed concerns about unfair restrictions on media access to press briefings on the national response to the Covid-19 pandemic. See full statement below:

With world leaders holding virtual media briefings, the Press Statement by the Namibia Media Trust and report by The Namibian are trivial and undermine collective fight against COVID-19.

Globally, tens of thousands have died following the COVID-19 outbreak. Following confirmation on 13 March 2020 of two cases of COVID-19, President Hage G. Geingob instantly announced on 14 March extreme measures to curb the spread, including placing restrictions on inbound and outbound air travel. Consistent with the commitment of President Geingob to transparency in Governance, the announcements were made in full view of the Namibian public, and the press participated en masse in the media briefing. On 17 March 2020, the President declared a state of emergency during a media briefing, and Government subsequently announced on 24 March 2020 additional measures, including a 21-day lockdown of the Khomas and Erongo Regions, which came into effect on 28 March 2020. All these public announcements by the President, four in the space of nine days (14,17,24,27 March 2020) were in the physical presence of hordes of reporters. Throughout the media briefings, President Geingob has been calling on Namibians to come together and to remain focused as the nation battles COVID-19.

Namibians have applauded en masse the decisions of the President as consistent with the scale of COVID-19, declared a Global Pandemic by the World Health Organization (WHO) on 11 March 2020. During the state of emergency, specific guidelines and regulations were announced on 27-28 March 2020, imposing professional restrictions and individual behavioral adaptations, to safeguard what President Geingob has been consistently and solemnly emphasizing: “The health of Namibians is the first priority”. To fight the further spread of the virus in our communities and not to risk the lives of Namibians, the WHO guidelines, of which some have been integrated in the national guidelines have been clear: stay at home; practice social distancing; avoid large crowds; wash your hands and save lives.

In light of these clear guidelines, the 2 April 2020 statement by the Namibia Media Trust “Curbing COVID-19 being used as pretext to implement regressive regulations against media freedom” is highly irresponsible and sensational, if not a game of Russian roulette with the lives of reporters, including other Namibians. Unquestionably, at a time where world leaders have gone virtual with their media briefings, the title was plugged from a report, and is wholly inadequate and inappropriate to describe Namibia, a country with the freest press in Africa.

To fight propagation of COVID-19 in Namibia, and in compliance with the preventative guidelines of social distancing and avoidance of crowds in one place, The Presidency elected, (logically that is) that the 1 April 2020 Presidential Update on COVID-19 would be largely virtual, and limited to the Namibia Broadcasting Corporation (NBC), One Africa Television and the Namibia Press Agency (NAMPA). Moreover, the Presidency carried a live-stream of the event on its social media pages, and Namibia Media Holdings shared facilities to reach a larger audience via its channels. In setting-up the format, and explaining the common-sense rationale for limited physical participation in the Presidential Update on COVID-19, The Presidency assured reporters that they could submit their questions via Whatsapp, which was agreed to. More important, The Presidency assured reporters on its Whatsapp group that the format was not perfect, and might appear discriminatory – but that was not the intention. The health of the reporters was the key consideration, respecting social distancing guidelines and thereby saving lives. Also, The Presidency informed that a rotational format to deal with sentiments of inequity could be fleshed out with the Editors Forum to deal with some of the concerns raised. To save lives, the progressive media should embrace the push for a phased approach of virtual media briefings.

NBC is a public good, and the choice was to maximize broadcast and virtual access to the media briefing, whilst practicing social distancing, and avoiding contagion through crowding. It should be emphasized here that there are sections of the media that were fully appreciative of the decision by The Presidency to limit physical participation and crowding of the briefing room. The Presidency also requested NAMPA to share footage of the event, and was assured by NAMPA that media houses had access to NAMPA content as subscribers.

The Presidency, in addition to sharing all statements delivered by the President and Ministers, invited reporters to reach out to line Ministers with further questions. After all, President Geingob consistently encourages Ministers and Senior Government Officials to engage with the public and the media at all times, emphasizing that their mobile phones must be accessible and open for queries.

The Chairperson of the Namibia Media Trust who is now the apostle of disregard for social distancing and crowding has been active on social media, preaching the complete opposite of what is promoted in the press release of the Trust, including her latest tweets and commentary in the newspaper of the Trust, The Namibian. Tuva Wolf, of Informante newspaper, and Martha Mukaiwa, a journalist who writes for The Namibian rightly raised concern about media briefings in the context of COVID-19, which reinforces the need by The Namibian and the Namibia Media Trust to support the Presidency’s decision to promote virtual media briefings.

Good journalism is about capturing fully the context in which newsmakers make decisions, make statements and the desired intention of decisions and actions. Journalism is about seizing the essence and gravity of events and the message communicated by newsmakers. The Presidency has no intention to censor reporters, and President Geingob has vowed to defend press freedom. But, in the context of COVID-19, it is in the best interests of reporters and the health of Namibians to follow media briefings through virtual and digital platforms. It is why the report in The Namibian, “Media bemoan(s) exclusion from press briefing” is frivolous about a grave matter in the form of a deadly virus, and the now globally accepted guidelines that ought to be practiced and respected by all if contagion is to be prevented. Disturbingly, going by the adage “do as I say and not as I do”, whilst alleging censorship regarding an event beamed live on national television and on national radio, and to which journalists of The Namibian posed questions to the President, the very same newspaper did not even seek commentary from The Presidency in compiling its own report in which it makes baseless allegations about censorship and exclusion.

President Geingob continues to underline Government commitment to a free press, and the lengthy interactions with media are a clear demonstration. At this crucial hour, during which the nation is valiantly fighting COVID-19, Namibians are looking for the press to provide leadership by delivering credible information about what elected officials do and share with the nation. It is a time for collaboration, and not the petty politics of confrontation.

The press is an important partner in nation-building and effective governance, and should play its critical role by providing Namibians with reports and analyses that further our collective fight against COVID-19. The Presidency will take measures to protect journalists, including through virtual media briefings, and cautions against needless fights at a time when the nation needs to work together to defeat COVID-19.